It feels like so long since I’ve written anything. But, lucky for you, I returned yesterday from a trip to the SF Bay Area and have a two-part post that’s just about to start, detailing every little thing that I did. I took a red-eye that landed at 7:30 AM and am still recovering 36 hours later, so forgive me if this sounds crazy at all.

Anyway, this was my frist trip to California! And also, the West Coast. For someone who likes to think of themselves as sort of well-traveled, it had always been pretty embarrassing for me to admit that I had never visited the other side of the country. But…now I have! I planned this trip primarily to visit one of my very best friends from college (and like, the whole world), Stephanie, who is at UC Berkeley for graduate school. But I also made sure to get a lot of good sightseeing and activities in there along with quality hangout sessions.

Packing for SF. It was strange packing a jacket in the New York heat, but it was definitely worth it!

I left New York last Thursday afternoon and my flight was delayed for three hours due to the plane crash cleanup at SFO, which left the airport with only one open runway. I didn’t realize my flight was that delayed until I got to the airport. I occupied myself by walking about a mile through my terminal to the JFK Shake Shack and book shopping. Neither of these activities worked out as well as I had hoped they would. I couldn’t find a seat at Shake Shack so I ended up walking back to my gate and eating my Shroom Burger and drinking my Sixpoint tallboy there, next to a group of about 15 teenagers who were on their way to New Zealand for some kind of adventure trip. I did find a book eventually – How To Be A Woman – by Caitlin Moran – but it took forever because there were no bookstores in the terminal. Only about 85 Hudson News locations with the same 20 books.

On the plane, I watched the weird and terrible Beautiful Creatures. It was a dumb but not totally unenjoyable diversion. I’m not quite sure how Jeremy Irons, Emma Thompson and Viola Davis were in this movie, but their presence in the cast is what had originally made me want to watch it. Anyway, I had a pretty fine flight and slept a little, landing at SFO around 11 PM. Steph picked me up, which was lovely, and brought me back to her apartment, where I passed out on the couch until the next morning.

I got to sleep in a bit and headed into SF by myself in the late morning. I stopped by Cole Coffee for a delicious Peruvian drip on my way to the BART, which I boarded at Rock Ridge and took into the city, getting off at Embarcadero. From there, I walked to City Lights Bookstore, where I browsed for a long time. It’s famed for its connection with Beat poetry which isn’t something that I’m really into – I guess? – but I wanted to buy something San Francisco-y there. I considered a copy of Tales of the City by Armistead Maupin, but then decided against it because I didn’t want to buy anything I had to bring back in my suitcase that I could just buy in New York. This is a problem I run into on every trip and I usually come back with exactly zero souvenirs. 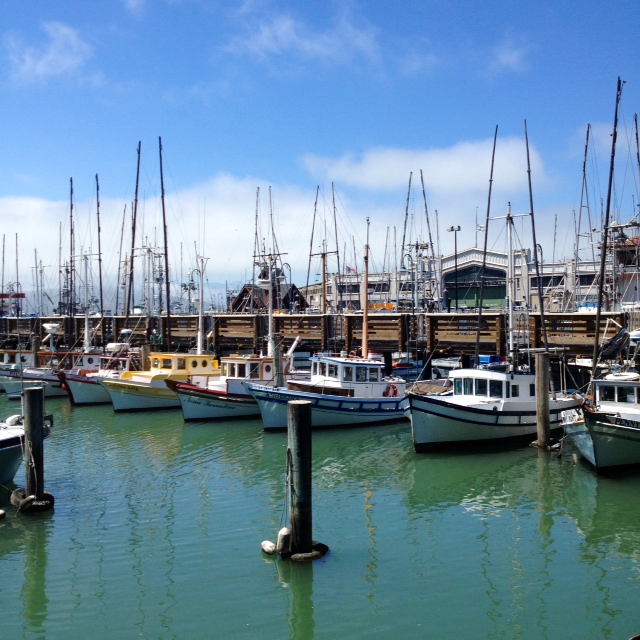 I walked from City Lights up to Fisherman’s Wharf, the Times Square of San Francisco. I generally get rashy from touristy spots, but I felt that I had to go there and I’m glad I did. (Also, I think that if I were visiting New York for the first time, I would go to Times Square just to see it.) I took some pretty good photos and ate chowder in a sourdough breadbowl. And because I was by myself, I didn’t feel like I stayed any longer or shorter than I should have. This is one of the beautiful things about being a lonely tourist. You can do whatever you want. (After typing the phrase “lonely tourist”, I was reminded of Pushing Daisies‘ “Charlotte Charles, the Lonely Tourist”. You should watch that show if you haven’t!) So, I walked up to Ghiradelli Square and got myself a chocolate cone to eat while I found the streetcar stop.

I met some fellow New Yorkers while waiting for the streetcar. One of them asked me if I thought San Francisco seemed like a different country. I told him that I did, but mostly because I had been marveling at the fact that I could be 3,000 miles away from New York and still in the same country. Also, it just felt too cold for the summer.

I got off the streetcar at the Ferry Building, where I walked around the market. I wished that I hadn’t eaten so much right before that because it looked like there were a lot of good treats there. I ended up browsing at Book Passage, which was very cute. Once I realized it was time to meet Stephanie, I headed out to walk down Market Street and to City Hall. This was probably not the best idea because Market Street went from super commercial to, for lack of a better word, seedy in about a block and then all of the sudden I was experiencing SF’s homeless problem firsthand. That was one thing I definitely didn’t anticipate. It did feel like neighborhoods could change very suddenly in SF, which is not really the case in the New York I live in as a priveleged, white female in my 20s.

We sat on an old log in Alamo Square

Anyway, I met Steph at her office and we went to Alamo Square, which was great. Well, except for that it got really windy and we had to leave because I was getting dirt in my mouth. (I wonder if that happened to the cast of Full House when they filmed that part of the opening sequence there.) From there, we headed over to Zeitgeist, a pretty famous beer garden. We had a couple of beers outside in the sunshine before we headed down to the Mission for dinner. We had a pre-dinner glass of rose at 20 Spot, an adorable wine bar. And then we went to Foreign Cinema for dinner. This place was also adorable and we had a great meal, except for that my dish was a tad too salty. But the decor and appetizer and wine all made up for that. 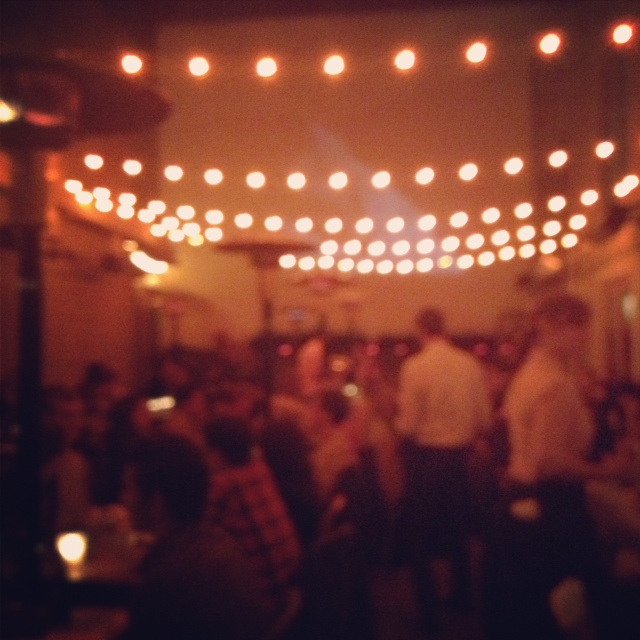 The next morning, I went to the Beanery in Berkeley for coffee and breakfast. After that, Steph took me on a tour of the Berkeley campus. It was obviously beautiful. I literally can’t imagine getting to enjoy a campus for more than two months out of the year, so I’m sure being a student there is a lovely experience since the weather is always tolerable. We walked down Telegraph Avenue and browsed the records at Rasputin. I didn’t see anything that I needed to have, though I discovered that they have a very large collection of Incredible String Band records. 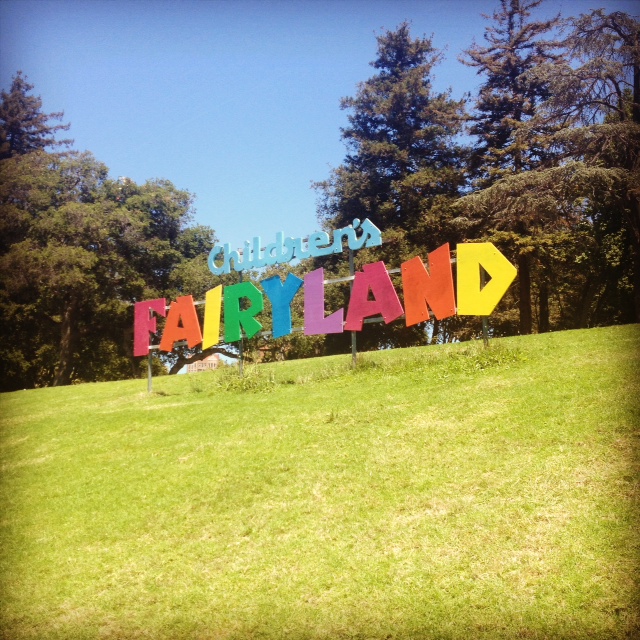 Spotted while walking around Lake Merritt

We caught the bus and took it to Oakland, where we walked around Lake Merritt and the farmers market in some very intense sun. (Ugh, guys, my sunburn. It’s so terrible.) I needed water really badly but we couldn’t find a single place that sold bottled water, which was a problem that plagued me for the rest of my trip. We walked from Lake Merritt to Umami Burger, which I was excited to try since it’s coming to New York soon. I got an original burger and some sweet potato fries and I am happy to report that it was delicious. (Though, I don’t think it was better than Shake Shack, for the record.)

Thoroughly stuffed, we headed back to Steph’s apartment for a little rest before going to her friends’ barbecue. I obviously didn’t know anyone at the barbecue, so I pretty much just kept looking around and thinking stuff like, “These people live in Berkeley. Weird.” Not because they didn’t seem like the type of people who lived in Berkeley. (I mean, my only reference before this for what Berkeley is like was the NBC show Parenthood.) I think because it’s hard for me to imagine people living places that seem very different from where I live. I felt the same way when I first went to college and met all of these kids who were from the Chicagoland area, who were just clearly used to things there. Like, it wasn’t weird to them that one of the large grocery store chains was called Jewel-Osco. Anyway, we didn’t stay for very long. We had to head back into SF for dinner.

Steph and I met my friend Kath, who I’ve known since we were kids, at Southern Pacific for a beer. We were joined by Kath’s brother’s girlfriend, Amelia, of whom I’d heard a lot during the past few years but had never met. We went to Local’s Corner in the Mission for dinner. It was awesome. The restaurant is focused on seafood, which I’m now convinced I don’t eat enough of. We shared five dishes and I thought that all of them were great. I was sad to go back to the East Bay after dinner, but I was super tired. We were going to Napa the next day and I had to rest up!

Kath & me at Local’s Corner. (The lighting wasn’t great.)

Come back later this week to read about the rest of my trip!

One thought on “Vacay in the Bay Area, Part One”