Another thing I’m trying out. Weekly recipe tests! I’m not such an accomplished cook that I can make up my own recipes quite yet. (Though I think I’m getting there.) But I do try new recipes all the time so I thought it’d be worth sharing them here.

This week’s test: these Zucchini-Almond Butter-Dark Chocolate Brownies. They’re really good! And they were super easy to make. 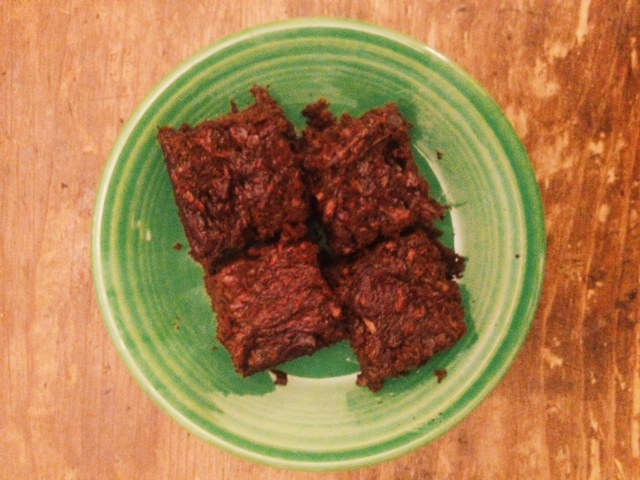 After we saw The World’s End yesterday, a bunch of my friends came over to hang out until Breaking Bad. Vincent and I went to the grocery store and bought a bunch of appetizers (Bagel Bites, sweet potato fries, cheese and crackers) as well as the necessary ingredients for these brownies. Believe it or not, I don’t keep almond butter or dark chocolate chips in my cupboard.

Here’s the recipe (via The Hairpin):

1 cups almond butter (or whatever nut butter you prefer)

1. Preheat the oven to 350°. Line a 9×9” brownie pan with parchment paper and lightly spray the paper with olive oil.

2. Shred the zucchini using a shredding attachment on your food processor, or by hand using a grater. Or just chop it up. (Note: I grated by hand. It didn’t take too long.)

3. Mix together everything else! Fold in the zucchini pieces and dark chocolate chips, mixing just until combined, and pour it all into your prepared pan.

4. Bake for ~40 minutes, or until a toothpick comes out mostly clean. I like these warm and still-gooey, preferably eaten on the porch, listening to the cicadas after the kids have gone to bed. (Note: I have no idea how long I baked these for. I never really time anything. I generally like to check on things until they look done and then stick a knife or a toothpick or a piece of uncooked spaghetti in the middle to see if it comes out clean.)