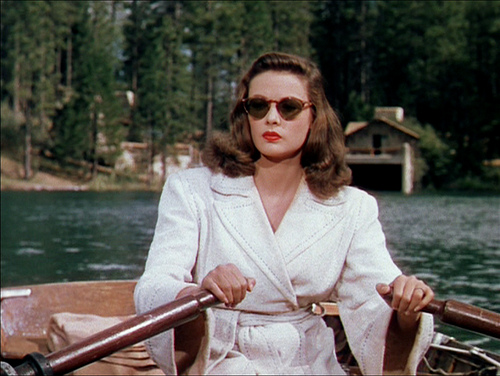 Yesterday, I saw Out of the Past and Leave Her to Heaven, two films that are part of the Femmes Noirs series currently at Film Forum. I really liked them and will hopefully catch another Femmes Noirs double feature before the series ends. Both films are playing again tonight at 10:15, so if you have not made plans and live in New York and don’t mind staying up late, you should totally go!

Leave Her to Heaven (1945) is in gorgeous Technicolor and stars Gene Tierney and Cornel West. Here’s the trailer:

Out of the Past (1947) stars Robert Mitchum, Jane Greer, and Kirk Douglas. Here’s a clip I found on the internet:

I hope to follow this post up with a complete ranking of Gene Tierney’s outfits in Leave Her to Heaven.