I got sorta tripped up while writing an essay yesterday, so there will be no real writing from me this week. But never fear! I’ve put together a big ol’ list of other stuff you can read:

– “A Blackbird in the Hand: Or How I Learned to Stop Worrying and Love Kate Bush” by Iain Cook (TheTalkhouse)

– “‘Not to Put Too Fine a Point On It’: How Dickens Helped Shape the Lexicon” by Ben Zimmer (Vocabulary.com)

– “Who Killed Adulthood?” by Sady Doyle (In These Times)

– “The Last Amazon” by Jill Lepore (The New Yorker)

– “An Unlikely Ballerina” by Rivka Galchen (The New Yorker)

Until next week or whatever…

2. Making this Baked Pasta with Broccoli Rabe and Sausage and then eating it all week

3. “A Portrait of the Alt-Bro as a Young Dumbass” by Gavin Tomson (The Awl)

This was probably my favorite thing that I read all week.

There are some really fantastic lines in this profile of Georgia’s ex-president.

5. A bunch of songs, which I’ve collected in one playlist:

6. Everything about the vote for Scottish independence

7. The recipe for Hangman’s Blood

It was Labor Day and we were getting ready to leave the lake house. My dad was outside in the driveway, which is really just a hill with some tire tracks, looking out at the lake below us, which was all sparkly in the sun. “I always hate to leave,” he said. “Yeah,” I said, pausing because I felt a lump forming in my throat. “Me too.”

I never go up there anymore, to the lake house. I’m “too busy” now, which I know isn’t really true. It’s just that I fear missing something new happening in my own world. And nothing changes at the lake. Or not too much, anyway. My family has owned the land since the 1920s and my great-grandfather and grandfather built the house together after my grandfather returned from World War II. The sailfish that my great-grandfather – allegedly – caught in Florida is still mounted on the wall in the living room. Mass market mystery paperbacks are still stockpiled in one of the first floor bedrooms where my uncle Jim, now dead ten years, used to sleep. The boat house has the same splintery planks on the floor and the same tangled collection of fishing poles that were there when I was a kid. The dock, which has been updated more than once during my lifetime, once again is threatening to fall apart completely.

I used to be up there a lot. When I was younger, when I had to do whatever my family was doing, I spent summer weekends and, sometimes, weeks at a time on Skaneateles. More often than not, those weeks were the last few of August, through Labor Day weekend, after which we’d go home to start school. At the beginning, I would complain about being away from home for so long. By the time we packed our car to leave, I would be fighting back tears as I walked around the lakefront, saying goodbye to practically everything I had touched during my time there. The tree swing, the rusty refrigerator, my uncle’s canoe. I hated to leave the lake as much as I hated to leave home.

One summer, our neighbor who lived there year-round gave me two rabbits to care for while I was there for our extended end-of-summer stay. Clarkie was friends with my mom’s brothers, who all spent more time at the lake than we did. He was six-foot-five, wore cutoff tanktops with cutoff jean shorts that he cinched with a rope belt, and got around the lake on a pontoon boat that he built himself. Clarkie raised rabbits at his house down the road and I was pleased that he’d entrusted me with two of them. One was black and white and the other was brown and I kept them in a cage. I fed them and would let them out to pet them and “get exercise,” which was mostly hopping around the grass near the house. At the end of the summer, I returned them to Clarkie. I’d wanted to keep them, but my parents said no. We had just gotten a dog and it would have been too much for nine-year-old me – not to mention my parents – to take care of a black lab puppy and two rabbits.

Months later, I asked one of my uncles what had happened to the rabbits.

“He probably sold ’em,” he said to me, matter-of-factly.

“Why?” I asked, shuddering to think that a person who wasn’t me was keeping them as pets.

“For rabbit stew!” my uncle said. “They kill them and then they eat them.”

Of course, I thought. This made sense. People who live out in the country would eat rabbits for dinner. But this didn’t make me feel any better. My rabbits were dead.

I thought of the rabbits a few weeks ago, when I was standing in the driveway with my dad, saying that I always hated to leave the lake. I remembered squatting down to open their cage, coaxing them out to enjoy the grass on our hillside. I tried to remember their names, but I couldn’t. At least at first. I pictured the black and white one. I remembered that his name had been Oreo, at least for the three weeks I was taking care of him (or her). But the other one. The brown one. I couldn’t remember its name. I don’t even remember if it was actually brown or if that’s just how I decided to remember it. And that made me sad all over again.

I liked so many things this week. Here they are, in no particular order:

A review of a book of WWI color photography. Includes some very pretty pictures.

“The Reinvention of Taylor Swift” by Josh Eells (Rolling Stone)

A very interesting (I thought) profile of Taylor Swift.

“Not Like Most Girls” by Anna Fitzpatrick (The Hairpin)

“I’m not like most girls. I’m three kids in a trench coat.”

“If I Knew You Were the One” by Richard Twice

A history in newspaper articles.

“The Death of Adulthood in American Culture” by A.O. Scott (New York Times)

The title pretty much explains what it’s about.

“If Pokemon Were Named By British People” by Robin Edds (Buzzfeed)

There are 3 videos. This is just the first one.

“Call Across Rooms” by Grouper 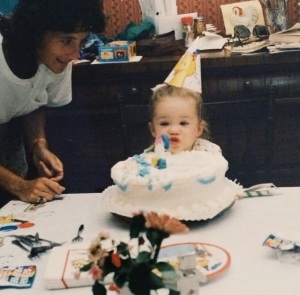 Hello. I haven’t written (here) in a while. I needed to take a little break from writing about personal stuff and then when I thought I should start up again it had been so long that I felt too paralyzed to write anything and then all of the sudden it had been a month and that just felt too long, so here I am again. The end-of-summer-slash-beginning-of-fall seems like a good enough time to get back to writing, anyhow.

A few weeks ago, on August 21 (I think), Emphatic Hands turned two. I never imagined I could keep it going this long. I’m proud that this blog is still kicking and immensely pleased that it still has a few loyal readers.

Even after two years, however, I’m still struggling with what I should really use this space for. At the beginning, I didn’t know what to write about other than my daily life, so I posted a lot about books, recipes I’d tried, and things I’d done over the weekend. Over time, I started writing fewer diary-like accounts and more personal essays. I still write a lot about books. And a little bit about music. And, when I have time, I like rounding up interesting stuff I’ve read on the internet.

My plan, for now, is to try to post some kind of personal essay each week. And then to post my weekly link roundup on Fridays. From time to time, I’ll share music I’ve been listening to and book reviews. I’ll try to stick to a schedule as best I can.

Anyway, thank you all for reading what I write here. I’ve grown a lot as a person and a writer over the last two years. Writing for an audience has helped me in more ways than I can count and I’m looking forward to continuing to do so for as long as I can.