Katie and I woke up and met Chris at Paddington Station, where we were catching a train to go to Oxford. I’d wanted to do at least one day trip while I was in London and decided on Oxford because it’s featured prominently in some of my favorite fictional series: the His Dark Materials trilogy and the television shows Inspector Morse and Inspector Lewis. I made absolutely zero decisions about what I wanted to do there before we got on the train, which I’m sure was annoying to my travel companions. I just had in my head that we’d get there and walk around and look at the colleges and eat lunch in a pub and have a lovely day.

The shit started when we got on the train, which was four cars and far too small to accommodate all of the boarding passengers. Luckily, we all got seats, though Katie and Chris ended up sitting on the other end of the car from me. I squeezed into a seat next to a woman, or possibly a man. I don’t remember anything about my seat partner except that they were sitting in the seat next to me. I tried reading Speedboat, but was distracted by the family standing in the aisle next to me. There was a middle aged mom and dad and a son in his late teens, accompanied by his girlfriend. The son was extremely attractive. (Extremely.) His girlfriend looked like an anime version of Baby Spice. There was nothing particularly interesting about them, but I kept imagining different reasons for their trip. By the time they got off the train in Reading, I decided they were visiting a charming but curmudgeonly grandfather for lunch.

It started drizzling outside just before we pulled into Oxford. When we stepped onto the train platform, it was pouring. Inside the station, I bought a map of the city in a tourist information kiosk. I never looked at it again. 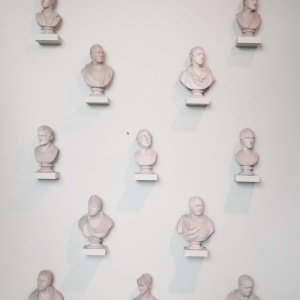 We decided to go to the Ashmolean Museum because it wasn’t that far of a walk and it also was an indoor activity. I was pretty miserable by the time we got there, worried that my friends were annoyed that I had dragged them to be bored at a museum on a rainy day. This feeling intensified as we spent a long while walking around the collections of ancient artifacts, which everyone knows are the most boring collections in any museum. Eventually, I ended up by myself. I found some things I liked: the Anglo-Saxon stuff, the musical instruments, most of the paintings, the tapestries, the ceramics. When I was finished, I met Chris and Katie outside, where it had stopped raining.

We found a pub called The White Horse for lunch. It was cozy and dark and wooden and everything was a little slanted. Our waiter, the jolliest waiter I ever did meet, gave us a sheet with the pub’s history on it. (It dated back to the 16th century! Queen Elizabeth I might have visited it one time!) I ended up using it as my place mat and got malt vinegar all over it. Our waiter looked more than a little disappointed when he noticed this later, as he was pointing out that we should keep it for a souvenir.

After lunch, full of sticky toffee pudding and apple crumble, we walked through not terribly heavy rain to Magdalen College, which is supposed to be the most beautiful Oxford college. Since it was already late in the day, the guard at the college let us in to walk around the grounds for free. The building we were allowed to walk around was beautiful in a very medieval way. It also did not seem like a place for college students, but what do I know? My alma mater was founded in 1851.

We walked around the grounds for a little bit, just as the sun was setting and the rain was letting up a bit. I attempted to walk by the canal, but it was muddy and I was wearing brand new shoes, so I decided that was a terrible idea and stopped.

When we left the college grounds, it started pouring. Katie and Chris had been walking around without umbrellas all day. I had one, but it didn’t even help at this point because it was raining so hard. It was getting dark. We decided to call it a day and head back to the station, where we just made the train.

I finished Speedboat on the train ride back to London, which was very hot and uncomfortable, at least until I was able to get a seat.

We had dinner in Islington, at a place that I thought was literally called “The Pizza Pub” until Katie and Christ explained that that was just what they called their neighborhood pub – actual name: The Hanbury Arms – because, for some reason, it had an extensive menu of basically just pizza. This would be my third pizza-centric meal in London.

The pub was fairly empty. I confused the young bartender wearing an oversized tiedye t-shirt when I tried to pay for my order with an American credit card. I explained to him that he had to swipe my card on the side of his credit card machine, but he tried to feed it into the part that reads chips like six times before he asked one of his coworkers for help. After eating our pizza and a game of cards, Chris went home, leaving me and Katie to have “Girls’ Night.” We drank as many glasses of wine as we could before we got kicked out of the bar at 11 PM. We hadn’t noticed that we were the only ones still there and that my bartender friend was closing up for the night.

On our way home, we saw a fox in the street. This was very exciting for me because I think foxes are super cute and also I had never seen one in the wild before, let alone just trotting around an urban area.

Before going to sleep, we had a nightcap: an entire bottle of prosecco.