I woke up hungover. I showered, got dressed, took some Advil I had brought with me in a plastic sandwich bag, and went down to the kitchen, where Katie was getting breakfast started. Instantly, I felt terrible. I should have been cooking them breakfast! But then, I thought, how could I possibly do that when I don’t know where anything is or how anything works? And I love doing stuff like this when I have guests. Just stop it, I told myself, and enjoy the damn breakfast.

And so I enjoyed the damn breakfast. It was very good.

We decided to walk along the Regent’s Canal on our way to the Columbia Road Flower Market. When compared to the day before, the day was spectacular, sunny and almost warm. I think it was the only day I wore shoes without socks. I spent our walk both partly delighted at the sight of narrowboats in the water and small cafes tucked along the path, and partly afraid that I would be knocked into the canal by one of the bikers zooming by us at top speed.

We exited once we’d tired of the traffic and single-file walking. I think it was then that we passed by the The Geffrye Museum of the Home, which Katie and I decided we had to go to on our way back. We proceeded to walk around in what felt like a lot of little loops through identical residential blocks until we got to Columbia Road.

Once there, we stopped in Vintage Heaven, which had a cute little cafe in the back called Cake Hole. Chris got a coffee and Katie bought a delightful needlepoint pillow that matched their couch at home and I wished that I could buy something but I didn’t have room in my suitcase and everything that caught my eye looked fragile. Also, every time I tried to look at something I got knocked into by another shopper, which didn’t exactly put me in a purchasing mood. 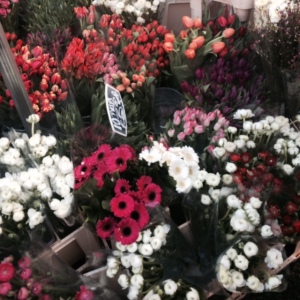 Outside, we headed toward the Flower Market, which was so crowded that I could barely look at any flowers. I had it in my head that I would take my time looking at beautiful flowers and take a lot of pictures that I would examine later in the day in order to choose a few to post on Instagram that would get like, a million likes. Instead, I was pulled quickly through the throngs of people almost against my will, while forced to endure the shrill sounds of flower sellers trying shouting bargain prices from their stalls. I was, of course, reminded of “Who Will Buy?” from Oliver!, in which Oliver Twist finds himself in the middle of a busy market after recovering from a fever and ends up getting stolen by Nancy and Bill Sikes. When we found ourselves at the end of street, I was relieved, but also felt I should go back and really fight my way through the crowd. I’d only taken one shitty photo.

my favorite model london living room, from the 1930s

The Geffrye Museum of the Home is housed in former Hoxton almshouses. Inside, you can walk through recreations of typical London living rooms from the 17th century to (nearly) the present day. If this sounds boring to you, you should stop reading right now. I was kind of obsessed with how weird this museum was, like walking through a train in which each car existed in a different period of time. Each living room from before the 1900s was accompanied by tons of information on household duties and activities, as well as the types of furniture and tools that Londoners would have used at the time. There was plenty for me to nerd out on, though by the time we got to the 20th century, I was exhausted. I spent our last 15 minutes watching a father try to hold the attention of his three young daughters, all of whom must have been under the age of six and were more concerned with playing with their museum-issued headsets than looking at the actual exhibits.

After the museum, we ate at a tapas place in Hackney. I can’t remember the name of it. I don’t even remember what we ate, really, except that there was a lot of food and it was all Spanish and maybe there were croquettes involved and some kind of goat cheese thing. I think I was suffering from extreme fatigue. (Actually, I know I was. Looking back on this day now, it all seems foggy and like someone else was doing everything I’ve described.)

As we were leaving, I saw a man wearing a crisp pink Oxford shirt and a matching pink cableknit sweater thrown over his shoulders sitting at a table on the sidewalk with his little white dog. While we waited for our Uber, I watched a toddler try to play with the dog, who was very calm and poised, just like his owner.

We were too tired to do anything that night, so we stayed in and watched He Got Game and about half of the MTV Europe Music Awards hosted by Nicki Minaj and ate Halloween candy out of a plastic pumpkin.