Thoughts and experiences from my first day traveling to/in London in November 2014. 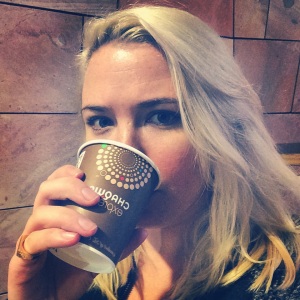 Somehow, I survived my first flight – from New York to Iceland – and then my second flight – from Iceland to London – and found the Heathrow Express, which would take me from Heathrow to Paddington Station, where I would have to find and board an Underground train that would get me to Islington, where I would have to find my friends’ house. The only things I’d consumed since leaving New York were two Nyquil caplets, seltzer and two cups of coffee. My phone was about to die. I charged it on the train using an adaptor I’d purchased at the airport for some amount of Icelandic money I hadn’t bothered converting to US dollars because, I thought, fuck it I’m on vacation.

I have all of these people on my Gchat list – most of whom I don’t speak to on a regular basis or, actually, ever – whose “status” is always their location. Not the location in which they live, of course, but places they’re traveling. There’s never an explanation. Just, simply, “Buenos Aires.” Or on occasion, something like “Lima -> Vancouver -> NYC.” I have mixed feelings about this practice because, on the one hand, I think it’s pretty pretentious. But, on the other hand, if I had the opportunity to travel a lot, I’d probably be an asshole about it too.

Walking from the Angel tube station to Chris and Katie’s house was one of the most terrifying short journeys of my life. There were two reasons for this. The first was that I was using precious international data to Google map my walk. The second was that I was completely unable to cross any street without imagining myself getting hit by a car because I had looked the wrong way.

Once I found the house, which was not as difficult as I’d imagined it would be, I let myself in with a key that Katie had hidden for me in an exhaust pipe. I had about four hours to kill until Katie got home – Chris was on a trip and returning the next day – so I took my time getting settled, which took a lot less time than I’d anticipated. After I’d showered and dressed, I turned on the TV. I watched an episode of Gilmore Girls, feeling a little guilty that it was two seasons ahead of where I’d left off in my Netflix binge and also that I was watching Gilmore Girls on vacation. The only thing that forced me off the couch was the fact that the internet at the house wasn’t working.

I felt very at home at CoffeeWorks Project. The name was dumb, but it reminded me of the coffee shop I’d recently had to stop frequenting at home. It had a limited menu of espresso drinks and tea. There was also a selection of whimsically flavored baked goods for sale. The space was modern and airy and the furniture was mismatched and rustic. It really did feel like it could have been in Brooklyn, which was both comforting and disappointing.

I found the only unoccupied corner, where I drank an Americano and ate a raspberry muffin filled with lemon curd as I used the internet for all sorts of things on my phone. I checked Instagram, where I was still getting likes on the selfie I took in the airport in Iceland. I used Viber to text my mom and Vincent, to let them know I had gotten to London safely. I deleted about 65 shopping emails and read and responded to the only two real emails I’d received. Then I wrote an email to my dad, who was celebrating his birthday.

It was getting dark outside, which was a relief because that meant Katie would be getting back from work soon. I’d killed more time getting to the coffee shop than I’d even meant to, as I realized I’d left my debit and credit cards at the house when I got to the bank to take out cash and had to go back. I read some of my book – Renata Adler’s Speedboat – until I realized I felt kind of sick, probably from the lemon curd in the muffin. I took a different route back to Chris and Katie’s, down an alley-like street where vendors were breaking down their market stalls.

When Katie got home, I felt insane. I was happy to see her, of course, but I also was so jetlagged that I had no idea if the words that I thought I was speaking were actually coming out of my mouth. She asked me if I wanted to go out to dinner or just rest and order in. It was Guy Fawkes Night – or Bonfire Night, or whatever they call it – and we could already hear quite a lot of fireworks going off.

Katie took me to a pub called The Scolt Head which, despite its blunt-seeming name, was warm and had a lovely little garden that I would have liked to sit in if it had been warm out. We caught up over a bottle of wine and I ate chicken and bacon pie, which I thought about not ordering until I remembered that I was on vacation. After dinner, we walked back to the house, unable to hear each other very well over the explosions. We stayed up a little later talking, but Katie had to go to work in the morning and I hadn’t actually slept in like two days, so we said goodnight. I slept for 11 hours, which I felt very proud of in the morning.