I stayed overnight at my grandma’s last Friday. I took the train up there, which was/is always really nice because riding the Hudson line on the Metro-North kind of feels like you’re on a boat since you can only see the water out the window (if you’re sitting on the river side) for most of the ride. And it really makes you feel like you’re getting out of the city, which I hardly ever feel when I take the 25 minute ride on the Harlem line to my parents’ house.

My view from the train window.

My grandma – who we call La – lives in Orange County, in the middle of the Hudson Valley region. (Embarrassingly, I just had to look up what part of the Hudson Valley Orange County is in and discovered that it has a pretty wacky Wikipedia page with lots of “fun facts”.) During the twenty-four hours that I was there, we spent a lot of time sitting and chatting at the kitchen table. I’m a sucker for old-timey stories, so basically I’m a grandparent’s dream. I even like hearing the ones that I’ve heard before. Like the one about how my grandpa would call my grandma up for a date, but he’d have to call the telephone at her grandmother’s boarding house across the street because my grandma’s parents didn’t have a phone and her grandmother would yell “Yoohoo!” from her porch so that she could run over to take the call. Could it get any old-timier? No.

In addition to old stories, I also love old things. La – like all good grandparents – has a lifetime’s worth of  books, objects and photos in her house just sitting there waiting to be rifled through by someone like me. (My other grandma has a lifetime’s worth of stuff x10 because she – like me – is somewhere on the hoarder spectrum…but she’s not the one I visited this weekend.)

Decades-old history books are my favorite. Here’s the inside cover of a book that I found in my grandma’s spare bedroom called Inside Europe Today by John Gunther, published in 1961:

And here is a book on how to win at Trivial Pursuit, which – even though I’m very confident in my Trivial Pursuit abilities – I wish I had asked to borrow:

Notice the leather-bound sets of National Geographic from the 1980s in the background. I haven’t looked through them ever. Not once! That will be my project for next time I’m up there.

This particular bookshelf has a great combination of 20th century paperbacks: 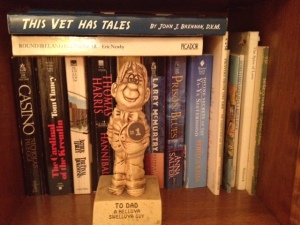 Memoir, religion, western, psychological thriller – you can find anything at Grandma’s House! Also, that little statue is one of my favorite tchotchkes ever. (Note to my family: Who gave that as a gift?)

But seriously, this is my favorite thing about my grandma’s house:

These pictures have been on the same bulletin board for a long time now. And I never get sick of looking at them. (I’m the one with the big white bow, FYI. It was my thang in the early nineties.) I’ve been pretty addicted to finding childhood photos for the last couple of months, so the above image was like the ultimate Flashback Friday Instagram post for me. (Wishing now that I had documented the other bulletin board, fridge photos and shelves full of First Communion portraits…)

It’s taken a long time – almost a week! – to post about this trip because my computer is beyond busted right now. Which is a story for another day, I suppose. But I guess when I originally decided to post on this subject, I was feeling really warm and fuzzy about being able to just hop on the train and hang out with my grandma and look at old things and hear old stories. And I still am feeling that way! It might be a while before I post something this sentimental, but I am looking forward to it anyway.