I, like everyone else on the internet yesterday, read “The Price of Nice Nails,” an extremely well-reported New York Times story on the abuse and exploitation of nail salon workers.  And I, like many people who were talking about the piece, was shocked by the details. Manicurists in the tri-state area are extremely underpaid and face ethnic discrimination. Most of the anecdotes shared by interviewed manicurists are upsetting to read, whether or not you’re a person who regularly gets their nails done in a salon.

A lot of the discussion I’ve seen following “The Price of Nice Nails” has centered on how to support nail salon workers now that their labor conditions have been exposed to the greater (New York Times-reading) population. I read one comment that suggested the only responsible way for people to react is to do their nails at home, unless they could afford to tip 100%. This made me feel conflicted. 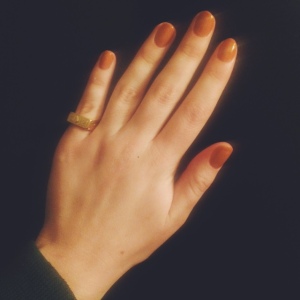 I get my nails done, if not regularly, then semi-regularly. I’m impatient when it comes to performing any sort of beauty routine – I can barely stand spending ten minutes applying minimal makeup each morning – and my nail painting skill level has never risen above kinda shitty. I love having nice nails and I don’t want to do them myself. I also love the experience of getting a manicure. That’s why I spend around $40 – including tip – for a gel manicure at a fancy-ish chain of salons in North Brooklyn every month or six weeks. Every time I get my nails done, I tip 20%. I know that’s not generous, but I thought it was perfectly acceptable. I can afford to spend $40 on my nails once a month. I cannot afford to spend twice – well, a little less than – that once a month. I wondered if I should, in fact, give up this small luxury.

Sarah Maslin Nir, the author of the article, also published this: “3 Ways to Be a Socially Conscious Nail Salon Consumer.” She suggests that the next time you go to a nail salon, you interview your manicurist, look for a timecard system, and pay (not necessarily tip) more. That seems fair enough to me.

Part 2 of the series, called Unvarnished, was published today. “Perfect Nails, Poisoned Workers” will be something I read later today. I was also interested in how this all came to be, so I read this interview in the Times with Sarah Maslin Nir, as well as this interview on Vice.

What else did I read this week? (And last week, since I neglected to post last week.)

Another story that made me feel conflicted, “Welcome to Pariahville” is about a community of sex offenders in Florida. (GQ)

This, on ZPM Espresso, a Kickstarter project that failed to launch. (NYT Magazine)

Sheila Heti’s short story, “My Life Is A Joke” (The New Yorker)

Alana Massey on “The Dickonomics of Tinder” (Matter)

An interview with one of my favorite musicians of late, Mitski. (The Cut)

I continue to read Kate Bolick’s Spinster: Making a Life of One’s Own, but I keep getting hung up on the fact that she never really seemed to be alone? Like, she always has boyfriends, even though she doesn’t really want them. I don’t know. The book is about more than her own life and I’m interested in what she has to say about her “spinster” role models, so I’m going to try to dive back in this weekend and reserve judgment for after I’ve finished (if I do).

I also just purchased People Who Eat Darkness: The True Story of a Young Woman Who Vanished From the Streets of Tokyo – and the Evil That Swallowed Her Up by Richard Lloyd Parry. This was my own pick for book club this month, so I’m hoping it’s as good as everyone says it is. (It was on this Oyster list of the 100 Best Books of the Decade So Far.)

Friday Read: The Yellow Wallpaper and Other Stories by Charlotte Perkins Gilman

In Charlotte Perkins Gilman’s short story “If I Were A Man,” a woman inhabits her husband’s body for an afternoon and uses her position to tell other men that women are just as smart, athletically talented, and employable as they are and as such, should not be judged for things like caring about fancy clothing or marrying the right person, because men have made it so that they have to do those things. Gilman, the author of oft-assigned short story “The Yellow Wallpaper” (1892), wrote frequently about women trapped by a patriarchal society. The heroines of her stories are emancipated by finding jobs, launching successful businesses, paying off their mortgages, falling in love with men who are interested in them rather than their domestic skills, and being rescued by cleverer women from the monotony of housewifery. Her writing can be heavy-handed, but her message is clear: women should be valued for who they are as people, rather than for their roles as wives, mothers, and caretakers. (Though if a woman is a natural caretaker and likes being that way, then it’s fine as long as she can make money off it, as one of her characters does when she starts a babysitting service.) Reading Charlotte Perkins Gilman now, over 100 years since she started publishing, I saw how little has changed in our society’s attitude toward women. I also recognized just how much has changed in that, as a woman (of a certain class and race) in the 21st century, I am able to work without question, to live on my own, to be as interested or disinterested in the domestic as I want to be. As a friend recently commented, it’s unlikely that we would be where we are now if women like Gilman hadn’t gotten angry and started writing or protesting. But it makes me sad when I think about how many women I know, myself included, feel far less entitled than their male counterparts, often without even realizing it.

Of the eight or so stories I read in the last week, I found “The Yellow Wallpaper” to be the standout. This isn’t surprising, as it’s Gilman’s most famous story. But what stuck with me was not the prose or her ability to create tension, but the fact that the story is not at all optimistic. The narrator, a woman who has been prescribed a rest cure while suffering from what we now know as postpartum depression, descends into a psychotic state as she imagines that the wallpaper in the room where she spends most of her time is moving. At the end of the story, she is not saved, neither by herself nor anyone else. She is mentally ill and beholden to her husband, who dismissed all of her prior warnings that she was not getting better. Where Gilman’s other stories seem like fantasies about women finding ways to have full lives outside of home and family, “The Yellow Wallpaper” is – in an extreme way – honest about how most women were dismissed by men and suffered as a result. In fact, Gilman herself famously had postpartum psychosis. “The Yellow Wallpaper” was born of that experience.
***
What have I been reading otherwise? I liked this TNY piece on Chloe Sevigny at 40. She is, unsurprisingly, an all-time favorite of mine. (I was ecstatic to see her in the new Netflix series Bloodline, even though I thought her character was a little blah.) I also couldn’t help but read all about Lilly Pulitzer for Target. From the angry screeds on my Facebook timeline to coverage of disappointed Lilly fans to actual reviews of the Target line and the Lilly aesthetic itself, I reveled in the criticism of this brand that loomed large during my childhood and adolescence and that I myself have come to have a distaste for*. I found this Jezebel critique – ‘Wealth Accompanied by Rejection of Creativity’: Bye, Lilly Pulitzer – especially delicious. However, I’m still fascinated by – and not in a mocking way! in a very real way! – the whole Palm Beach-y, ladies of leisure lifestyle that Lilly is associated with. And for that reason, I also decided to revisit this 2003 Vanity Fair interview with Lilly Pulitzer herself. On a not unrelated note, here is a Town & Country piece on Dorrian’s Red Hand, the ultimate Upper East Side preppy bar. I’ve only been there maybe three times and have run into people from past lives on each of those trips, so their first point is at least definitely true. I’ve also been working my way through the current issue of The Paris Review, by which I mean the interviews with Hilary Mantel, Lydia Davis, and Elena Ferrante. (What a boon to be able to read these three in the same issue!) I’m still “reading” Stoner and I think I might just give up soon? I’m going away for the weekend and I didn’t even bring it with me. Instead, I have Kate Bolick’s Spinster in my bag.
*Full disclosure: Growing up, my wardrobe featured, if not a lot of Lilly Pulitzer clothing, a not insignificant number of pieces. Also, I have worn a Lilly Pulitzer dress within the last year. (But! It’s really plain – navy blue, no pastels or cute animals or martini glasses – and my mom bought it for me for my college graduation six years ago and it somehow looks brand new and, I think, it fits my current, very un-Lilly aesthetic just fine.)